I have two kids in school this year and both needed new pencil cases. I had great success with the Perfect Zip Bag pattern by Elizabeth Hartman of Oh Fransson!, so I decided to use it again. Why mess with a good thing?

The first bag was made using leftover scraps from the Seven Seas gym bag I made last year. Now it’s a matching set! Kid No 2 helped pick out exactly which creatures needed to show on the outside.

The second bag was made with leftover fabric from my latest pyjama sewing project, and from a quilt I made ages ago. Kid No 1 picked all the fabrics. Even the interlining is from scraps from another project.

All scrapbusting, all the time!

This project was part of the Sewcialist Scraptember Sew Along and the Stashbusting Sew Along Kid Challenge.

Size: Large (View A), with inner pocket and wrist strap.
Cost: 0$
Sewing Level: Beginner.
Modifications: None.
Results: Great. I would strongly recommend this pattern and would make it again.

Just to be clear: The Angry Birds name is trademarked by Rovio Entertainment, LTD and used by the fabric manufacturer under licence. The bags shown here are not official licensed products and are not available for sale. But you can always buy some fabric and make your own!

This is something I made a while ago, but never blogged. This is a gift I made for my mother, a little zip bag. It’s actually part of a set I made. There is also a coin purse and a larger tote. But I was sewing these up the week before Christmas and had no time for a photo session.

I used the Perfect Zip Bag pattern by Elizabeth Hartman of Oh Fransson! It’s great pattern that I’ve used before with great results. I colour-blocked this version, using black chambray and a Japanese-inspired print that I picked up as a fat quarter at a nearby quilt shop.

Fabric: Black chambray, unknown wave print. The lining is Argyle in Steel from the Remix Collection by Anne Kelle for Robert Kaufman. The interlining is canvas.

Modifications: I colour-blocked the exterior. 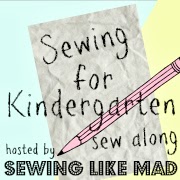